Rope and Belt Therapy For Osteoarthritis of Knee Joint Book (RBT BOOK) is available on Amazon For 600 INR. Or Google pay on 8390572626 & Receive Book by Speed Post!

Thyroid autoimmunity can cause several forms of thyroiditis & may lead to hypo or hyperthyroidism.

1) Acute thyroiditis - is rare, but when present in children or young abult presents WITH PAIN IN THYROID, fever, DYSPHAGIA. It may become suppurative.

4) Silent Thyroiditis - Also painless thyroiditis, offen occurs post - partum - 3-6 mts. after delivery. It has a course like sub-acute thyroiditis & occurs in patients, with underlying authoimmune thyroid disease. Typically a phase of thyrotoxicosis for 2-4 wks, then a phase of hypothyroidism for 4-12 Wks, followed by resolution. To distinguish from Subacute Thyroiditis, the ESR is N & TPO A is 🡩. For transient treatment thyrotoxicosis, symptomatic Propranolol - 20-40 mg 3 to 4 times daily, for transient hypostage, T4 may be given in small (50 mcg) doses, but should be -withdrawan & monitored.

5) Durg induced Thyroiditis - Many drugs used for malignancies and chronic hepatitis B or C can lead to thyrioiditis. 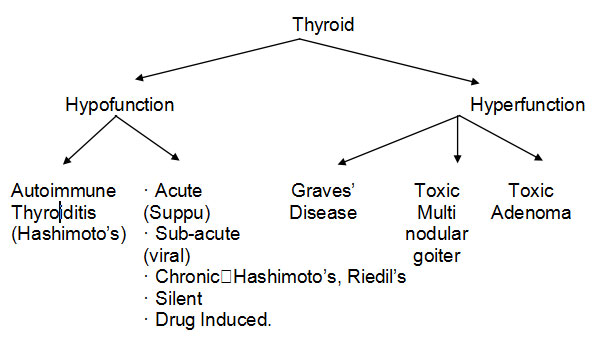 3 factors alter thyroid function in pregnancy.
1) Transient increase in hcg during first Trimester, which stimulates the TSH receptors. This may induce transint hyper thyroidism, but resolves in middle of pregnancy.
2) Esterogen induced rise in TBG during 1st Trimester, which is surtained during pregnancy.This will induce decrease in level of free T3 T4 =- L Hypoth. State.
3) Increased Urinary iodide excretion which can cause impared thyroid hormone synthesis, in the areas of marginal iodine sufficiency. Dietary deficiency will enhance / induce hypothy. Status L supplementation of Iodine is a must.

Thyroid is an endocrine gland, situated on trachea (windpipe) in the shape of a butterfly. It is richly supplied by blood. There are four parathyroid glands at the posterior (back) surface of thyroid gland.
Thyroid gland secretes two hormones, T3 – Tri – ido – thyronine & T4 –Thyroxine- Iodine is required for their synthesis. Their secretion is stimulated by Pitutary gland by TSH – Thyroid stimulating hormone. Pitutary is stimulated by hypothalamus by TRH – Thyroid Releasing Hormone. This hypothalamo – pituitary – thyroid axis does have a circadian rhythm.
TSH acts on thyroid cells by combining with receptor. TSH increases the secretion of T3 & T4 by various ways & its release within 30 min.
Disturbed psychological status like anxiety and excitement may affect thyroid function by altering the secretion of TRH & TSH. This effect is mediated by hypothalamus.
Commonly seen thyroid disorders in society are Autoimmune thyroid disorders. They may present clinically, as hypo – or hyper thyroid status.
Role of stress in autoimmune process is not clearly established.
Hence role of Yoga as a Theraputic modality in Thyroid disorders, can not be explained, however the Yogic discipline will minimize anxiety & excitement (by practice of equanimity) helping hypothalamic dysfunction.